We don’t work for the insurance companies. We work for you. 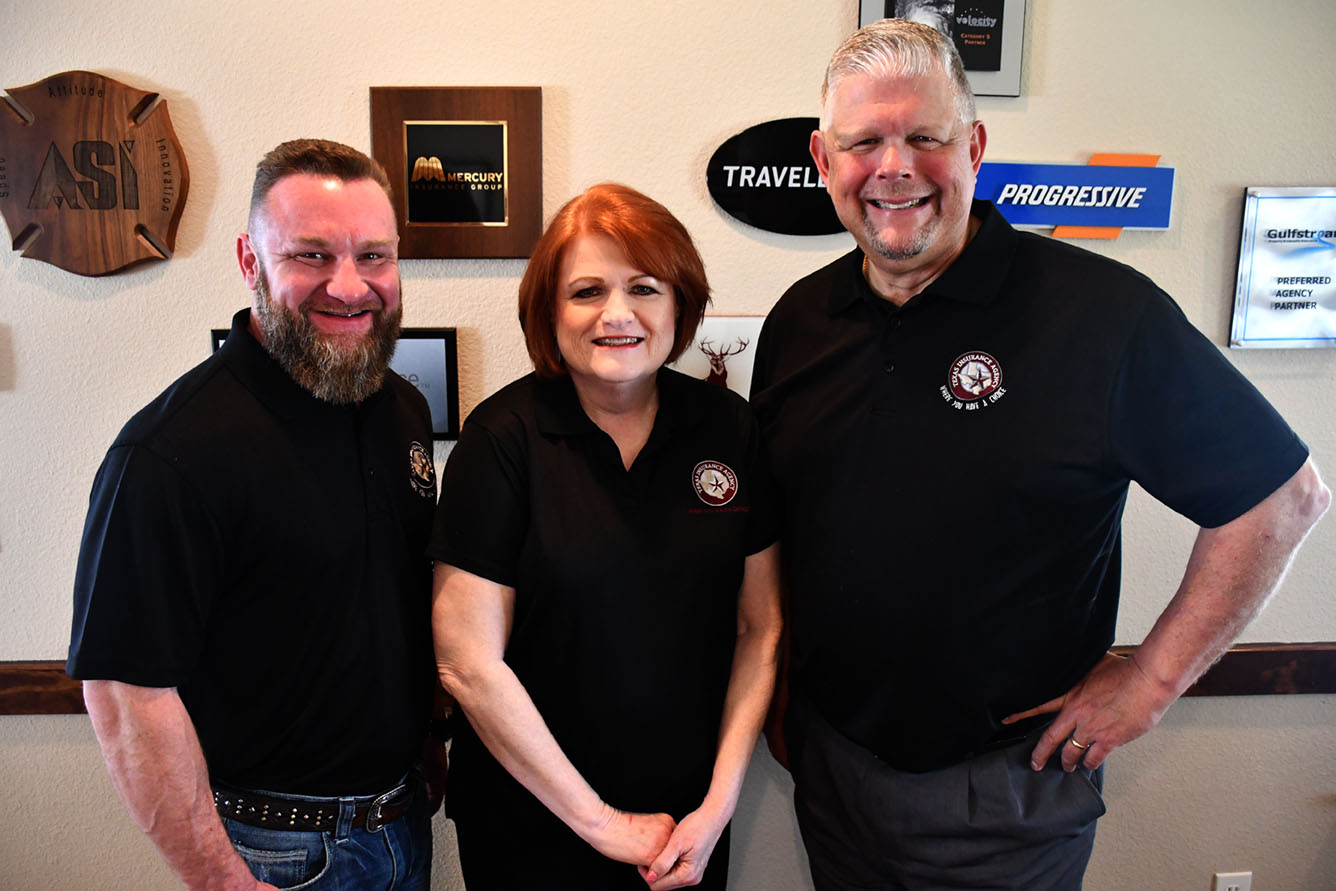 Texas Insurance Agency strives to conduct business in Katy with the highest level of professionalism, honesty, and integrity. We always do our very best for our Katy clients and the businesses our insurance agency represents. We will consistently practice good business fundamentals by actively listening, understanding, recommending, and paying extraordinary attention to the details. While so many companies have grown away from prioritizing customer service, Texas Insurance Agency in Katy remains committed to its clients and truly values the relationships it has built. These relationships continue to grow and are based upon mutual trust.

We will continue to grow our Katy insurance agency based on a solid foundation of service first, last, and always. It is with these ideals and a grateful appreciation for the opportunity to serve others that make Texas Insurance Agency a truly unique independent insurance agency.

Our expertise is based on a well-trained experienced staff that can tailor a comprehensive insurance program for your needs.

As an independent insurance agency, our duty is to our clients and their business. As your Katy insurance agents, it is our responsibility to provide YOU the best service and the best coverage, at the best possible price.

Whether you need to make a policy change, have a question about billing or need to report a claim, our customer service representatives are the best in business and will handle your request professionally and quickly. Our web site is also available 24/7 to accommodate your busy schedule.

No matter what your insurance need or question we invite you to experience an exceptional level of customer service at the top Katy insurance agency.

We are also providing our insurance services to Fulshear TX. If you want to learn more about why we are best, click here Fulshear TX Best Insurance Companies. 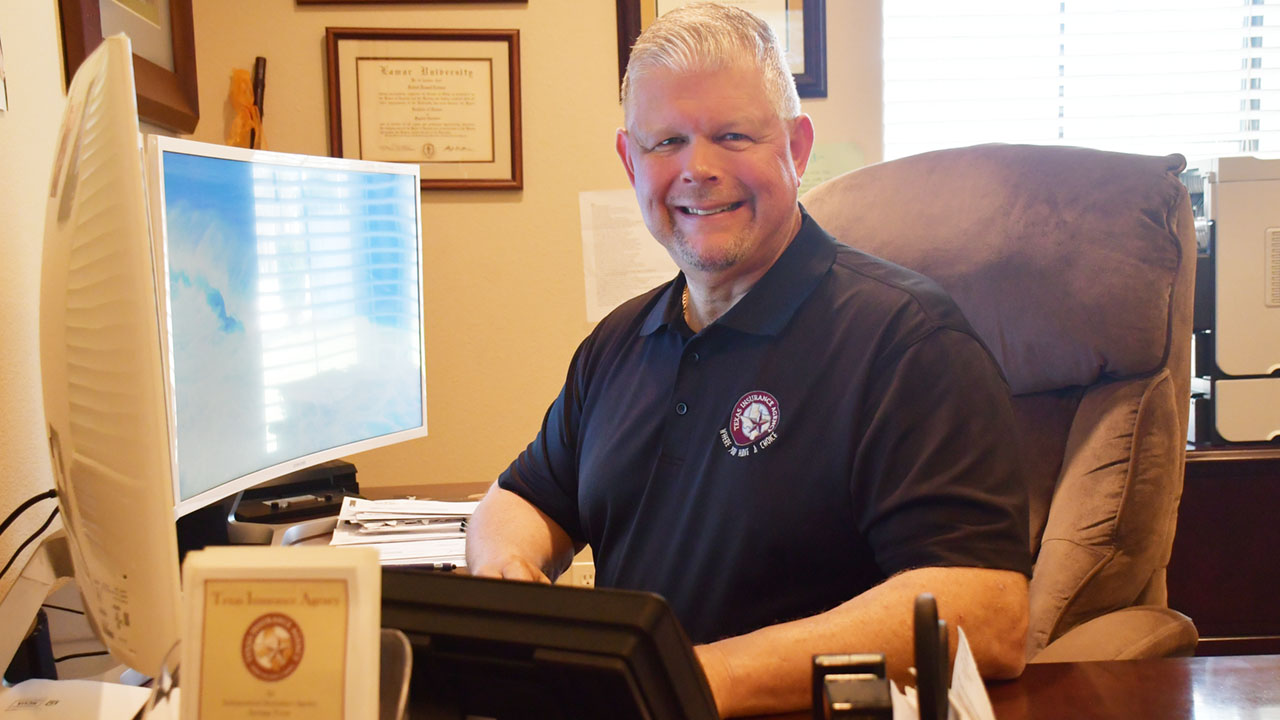 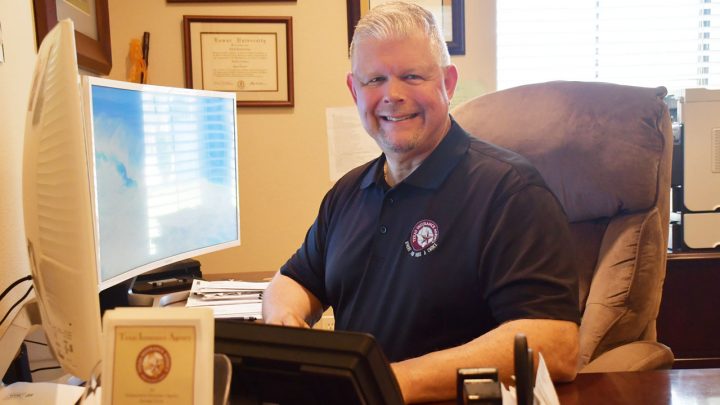 Roland is a graduate of Lamar University where he earned a Bachelor of Science degree in Physical Education with a minor in Speech / Communication and Life / Earth Science.  He also earned a Master of Science degree in School Administration from the University of Houston–Clear Lake with an emphasis on mid-management.  Roland began his professional career as a middle school science teacher and high school coach.  Later in his career Roland became an Assistant Principal for Curriculum and Instruction at the middle school level.

In 1997 Roland changed careers and became an insurance agent for Allstate Insurance Company.  During his career with Allstate, Roland earned many honors from the company.  After selling his agency in 2007, Roland took some time off and then started back into the insurance business as an Agent/Owner with Texas Insurance Agency.

As a Certified Insurance Counselor, Roland attends continuing education classes to keep up with the ever changing world of insurance. He is committed to making sure his clients feel comfortable with their purchase by educating them about the details of the policy coverage.  Roland separates himself by “going the extra mile” for his clients.

Roland and his wife Alice moved to Katy, TX in 1998 and immediately made it their home.  They have four wonderful children, Brandy, Mallory, Timothy, and Sarah as well as four grandchildren.  As a member of the Cinco Ranch Rotary Club, Roland donates his time and financial resources for the support of Brookwood and The Ballard House.  Roland’s hobbies include writing, singing, playing the piano, fishing and hunting, as well as participating in and watching all kinds of sports. 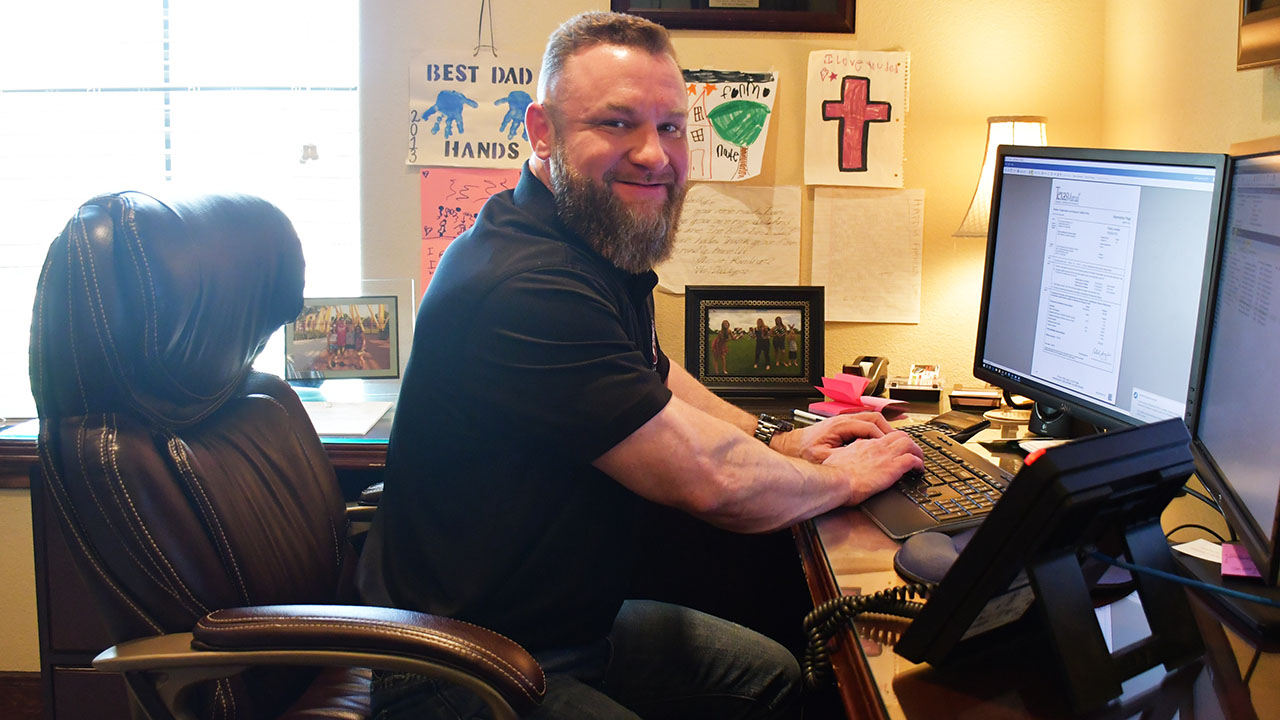 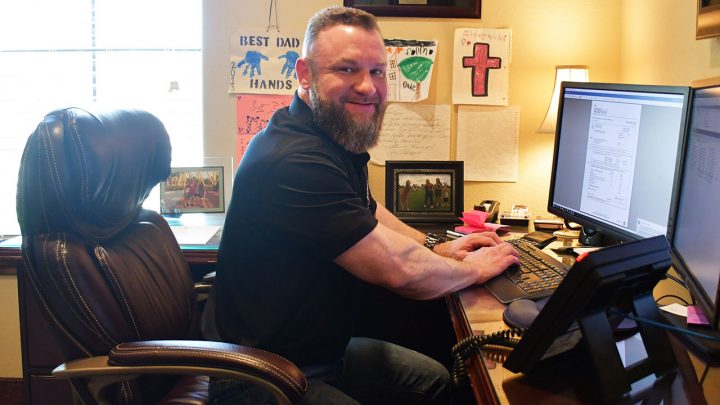 Jeff began his insurance career in 1994 with Farmers Insurance Group as an apprentice with his father.  Training under his father for the first two years Jeff learned the ins and outs of the insurance industry.  Jeff developed into an agency manager and was responsible for growing his fathers’ agency into a mega-agency of over 4,000 policies in force.  It was here that Jeff learned the importance of quality customer service, honesty & integrity in business dealings and how to build a balanced book of business while remaining profitable.  As Jeff realized success in working with his father he began to develop a dream of starting his own insurance agency.

In 1998 Jeff was approached by Allstate Insurance Company, and was recruited to start his own agency.  Jeff began his career with Allstate, and had to call to action everything he learned from working with his father.  Jeff quickly grew his agency, and earned several awards for growth, profitability & customer service.  After 18 months in business Jeff saw an opportunity to grow thru acquisition and purchased an existing agency.    His prior experience allowed him to excel as an agency owner with 4 customer service agents and 2 sales agents.  In 2003 Jeff purchased his fathers’ agency, as his father was ready to retire from the insurance industry.  After 10 years in business with Allstate Jeff decided to sell his agency, and start a new venture as an independent insurance agent.

Jeff is now a partner in Texas Insurance Agency doing exactly what he once dreamed of doing.  He is deeply involved in growing the commercial division of Texas Insurance Agency.  Jeff is also involved in the day to day operations of marketing, sales and customer retention.  Jeff is able to set himself apart from other agents by calling on his years of expertise, and by placing an emphasis on customer satisfaction.

Jeff is married to his lovely wife Kimberly, and they are blessed with 3 beautiful daughters and 1 son. They love spending time with their kids, Kaylie, Kendra, Kara, and Nate.  Jeff’s hobbies include boating, skiing and most of all just hanging out with family & friends. 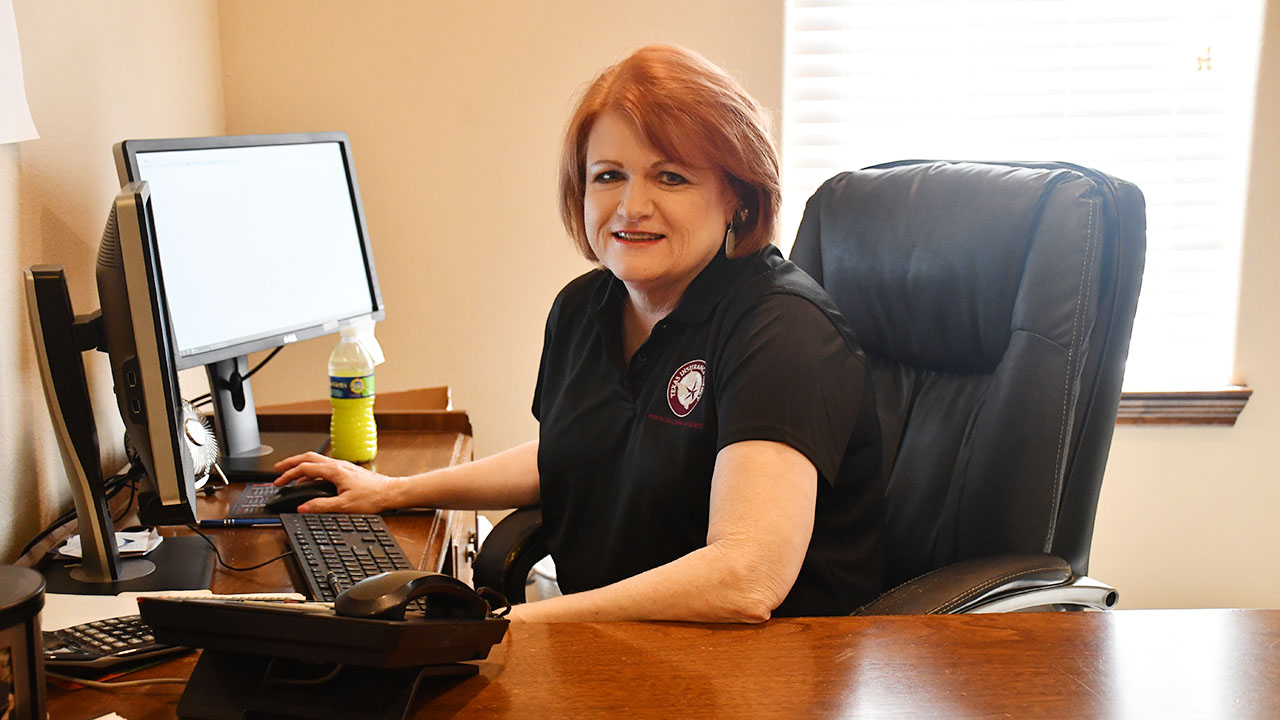 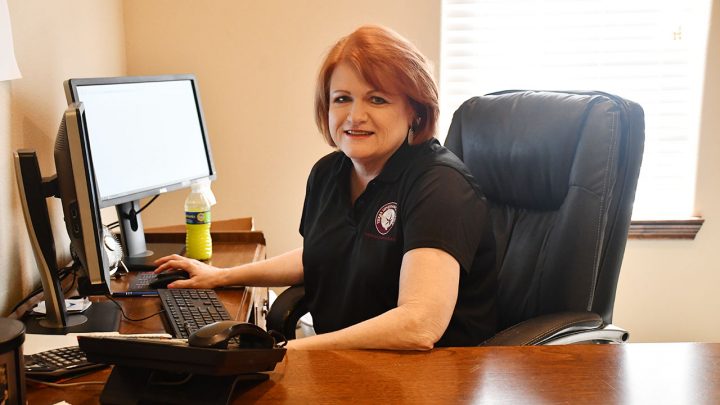 As a Licensed Sales Producer Kristy prospered in sales and helped to grow a multi-million dollar insurance agency.  Eventually Kristy rose to the level of Sales Manager overseeing the sustained profitable growth of two agencies.

In 2012 Kristy left Allstate Insurance to join Texas Insurance Agency in the same capacity of sales and management. Over the years Kristy has helped build and grow the agencies personal lines department.  She has especially enjoyed watching her client’s children grow up over the years, working first with the parents and eventually their children’s families.  Kristy strives to make sure that her clients insurance needs are met providing them with the best coverage options to protect them, and their families.

Kristy has been married to her husband Bobby, for over 35 years, with one adult son who lives locally with his own family.  The couple has lived in the Katy area since 1989, and she is a native Texan through and through.  Kristy enjoys traveling, shopping (unfortunately for Bobby), country music, watching the Houston Astros and Texans, and hanging out with her friends and family. 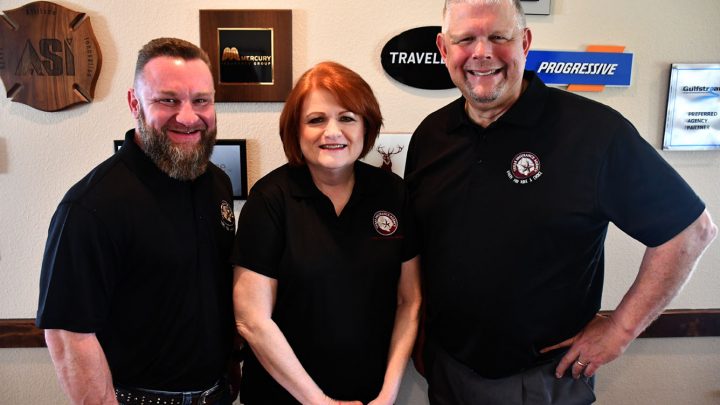 Get a quote today!